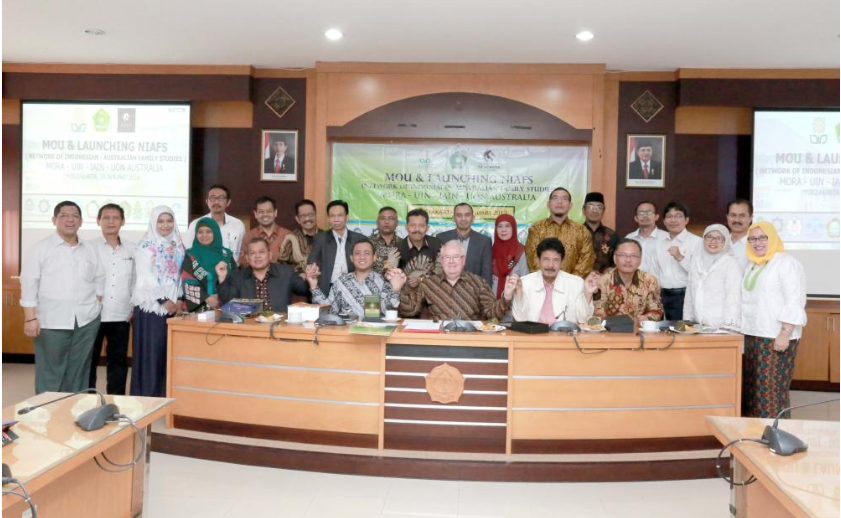 Signing of MoU was held at UIN Sunan Kalijaga's campus on January, 28th, 2019.

UIN Sunan Kalijaga Yogyakarta in cooperation with 11 State Islamic Higher Education Institutions (PTKINs) have attended a ceremony to sign a MoU with The University of Newcastle Australia (UON). The memorandum outlines the strong willingness of PTKIN and UON to continue to work together with mutual trust towards the development of family studies in both countries. Prof. Alan Hayes, as the representative of UON, said that in the future, lecturers of PTKINs, who work with the issue of family studies, could attend a 4-month program in Australia, which include seminars, lectures, research, and joint publication.

Present in the forum was The Head of Sub-directorate of Research and Community Service, Dr. Suwendi, M. Ag., to represent the Director of Islamic Higher Education of the Ministry of Religious Affairs (MORA, the Rector of UIN Sunan Kalijaga, and the Rectors and Representatives of PTKINs. The Rector of UIN Sunan Kalijaga, Prof. Drs. K.H. Yudian Wahyudi, MA., Ph.D., accompanied by the Vice Rector of Student Affairs and Cooperation, Dr. H. Waryono Abdul Ghofur, M. Ag, and the Director Family Action Centre, The University of Newcastle, Australia, Prof. Alan Hayes, Ph.D., said that the institution fully supports the consortium in order to develop the discourse of family studies in Indonesia.