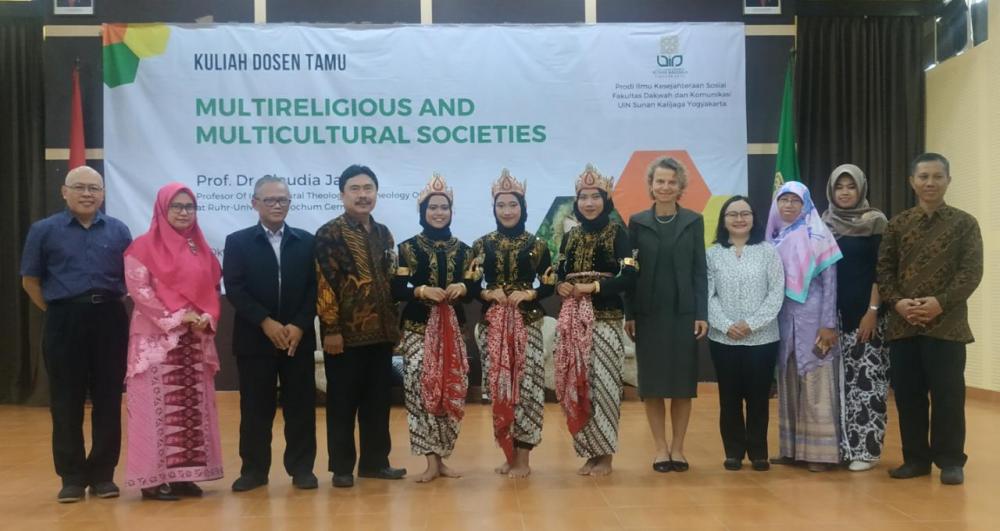 Andayani, S.IP., MSW.,( The Head of IKS Program), explained in her opening speech that the forum with the theme "Multirelous and Multicultural Societies," was intended to provide students on how to encourage peace between religious communities and solutions to create peace itself.

This forum was attended by IKS students from various forces, and also presented the Ministry of Social Affairs and several parties engaged in the social field, social service institutions in Yogyakarta and the general public. a discourse with a guest lecturer is routine activities carried out by IKS study programs every semester by bringing speakers who are experts in their fields.

While a guest speaker Prof. Claudia explained the multicultural and multireligious conditions that she encountered in Germany. She also emphasized how the dialogue between religious communities became the best solution to establish relationships between people of different religions to create peace between religious communities. Another attractive message, Prof. Claudia, that radicalism is a form of movement to counter globalization which is more oriented to the West. A radicalism movement is also a form of rejection of internalization. So the radicalism movement is a movement of people who are not ready to face the global era. This means that the radicals are not capable to comprehend the flow of science.

Andayani supposed that after this activity, UIN Sunan Kalijaga students earned new experience about the background of the radicalism movement in other countries, especially in Germany. Therefore students have the spirit to study more diligently. Conduct a variety of positive activities, think more openly and be more tolerant of anything and anyone without objecting backgrounds, especially religious backgrounds. So that it can approach the global era well. Become a superior generation, win global competition, with the understanding of Islam that rahmatan lil alamin. Furthermore, this activity is also expected to be the first step for the IKS study program to start cooperation with institutions and NGOs in Germany. (Aulia- internship)