Promoting Arts as One of the Main Elements of Education, Rector of UIN Suka invited Artists and Curators of Yogyakarta 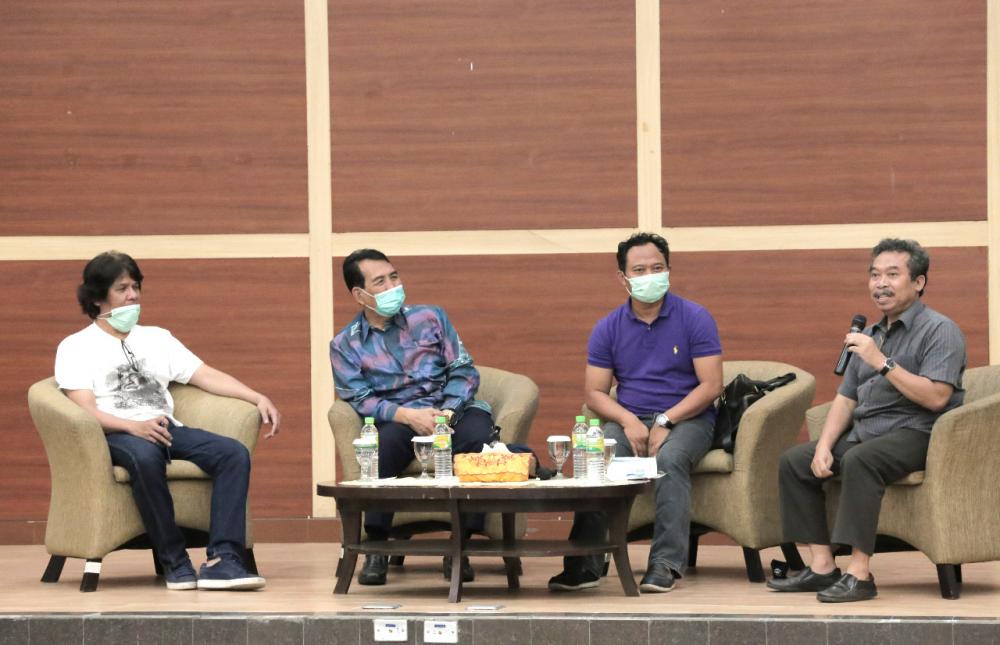 The rector of UIN Sunan Kalijaga Yogyakarta, Prof. Al Makin invited artists and curators of Yogyakarta to have a painting discussion, dancing as well as singing, at Prof.RHA. Soenardjo, SH, campus building, on Saturday, 28/11/2020.

In his opening speech of this dialogue event, Prof. Al Makin explained that this forum is made in order to promote Cultural Arts as one of the four main elements that needs to be developed in education, including higher education. He further explained that education has four main elements, and they are ethics/akhlak (morals)/character building, aesthetics/cultural arts, cognitive, and athletics. Most campuses still emphasize the cognitive element, and it is on memorization instead of exploration or research which therefore becomes quite often problematic.

For the next four years of his leadership, Prof. Al Makin is determined to develop the four main pillars of education in educating all students of UIN Sunan Kalijaga. Thus, he invited artists and curators on this occasion. According to Prof. Al Makin, artists possess such a refined soul, spirit, sense of beauty that is able to make people happy, entertained, and this energy needs to be shared with a lot of people. That was why in this forum he wanted to know deeper about the Cultural Arts practitioners, curators, and artists of Yogyakarta in order to gain a profound understanding on aesthetics so as to adopt it into the curriculum of UIN Sunan Kalijaga.

Also in this forum, the executives of UIN Sunan Kalijaga along with the artists and curators did some dialogues, painting, dancing, and singing that were intended to promote Art as a pillar to be developed in education, and also to entertain. “The citizens of Indonesia think too seriously, always about politics and philosophical things, instead, let’s think more about beautiful things, painting, dancing, and singing that unite us, Indonesians. Art can unify different pieces. In Art, there is no one asking about someone’s religion, ethnicity, but instead, all different pieces merge together enjoying the beauty of art and building the nation. Indonesia also possesses rich collections of Cultural Arts. If they receive proper development, they will minimize conflict and turn Indonesia into a nation that is admired by the world for its Cultural Arts richness,” said Prof. Al Makin.

The Senate chairperson of UIN Sunan Kalijaga, Prof. Siswanto Masruri supported the Rector’s determination to develop cultural arts in the next curriculum. The human soul can become more refined, gentle, and considerate through cultural arts so that it can deflect the radical understanding of religion. Quoting Prof. Mukti Ali (a notable figure of pluralism from UIN Sunan Kalijaga) thought; “life is simple with science, life is beautiful with arts, and life becomes purposeful with religion,” the education at UIN Sunan Kalijaga should therefore combine the three of them. The rector of ISI (Indonesian Art Institute), M. Agus Burhan who attended this forum as an artist, warmly welcomed the invitation of the rector of UIN Sunan Kalijaga to construct a network consolidating Islamic studies with cultural arts. To turn UIN Sunan Kalijaga into a place that is not exclusive to a certain religion, ethnicity, or class. Taken from Muhammad Iqbal’s thought that the ethos of art is unlimited, so refining the human soul through a work of art would horizon and deepen our diversity, said Agus Burhan.

Meanwhile, Butet Kartarejasa conveyed a message for Indonesia which is under the threat of being disunited because of political identity. “This is a peaceful Islam, egaliter Islam, and Islam that respects diversity, and UIN Sunan Kalijaga pioneers it. I wish Islamic colleges in Indonesia adopt the same act touching across faith and discipline. A religion which interacts with cultural arts is a Kaliurang (a region of Yogyakarta that is known for its peacefulness and refreshing natural environment) religion, a peaceful religion,” Butet said. This forum was held in collaboration with BPD DIY. (Weni/Doni/Dimas)